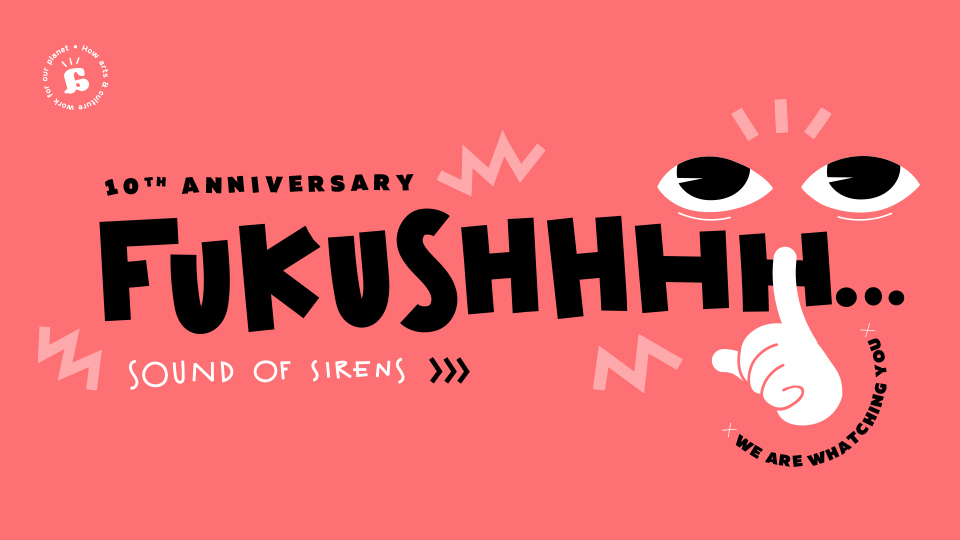 Today, the 11th of March 2021 is the 10th anniversary of the Fukushima nuclear reactor meltdown, a tragedy which took lives, homes and hopes. The disaster left the Japanese population in great despair. Because the Japanese government passed a ban which, out of security reasons, prohibited any reporting inside the country, a group of artists set up a website that allowed those affected to speak up. On it they were able to share their experiences without the risk of restrictions or prosecutions.

Fukushima – a small city at the Japanese East coast. A city like any other – back in the days. A city that became the symbol of the 21st century for the devastating power of nuclear energy. Fukushima as the representation of misery and destruction of human lives, livelihoods and the surrounding natural world.

It was exactly 10 years ago, in March 2011 when the Fukushima Daiichi Nuclear Power Plant collapsed and exploded. Before that was the earthquake followed by a Tsunami – 14m above sea level – which swept over the plant and city.

After the nuclear meltdown, the invisible and life-threatening radioactivity spread over 250 km beyond Tokyo. The core zone of the contamination transformed into a “death zone” so that tens of thousands of people had to be relocated. Some of those that left everything behind still live in temporary huts today. Many refused to leave at all and stayed on contaminated grounds that once used to be very fertile.

Many scientist said it could have been prevented. Japan is a country that has been frequently hit by earthquakes and tsunamis due to its location along the seismic “Ring of Fire”. Some said safety regulations were inadequate and did not include natural disaster prevention. Some said that the system failed its performance. Others say it was a human error, a man-made catastrophe. What is true, I do not know.

How was this disaster communicated? Internationally, it was broadcasted widely with a focus on the nuclear reactor accident. The proceedings were “well” commented on by the Japanese government and the power plant operator Tepco – to the world outside of Japan. Numbers and statistics about radiation rates were stated, however without any further explanation to play down the severity of the matter.

The final message: Everything is fine; there is no risk.

Nationally, Japanese television stations broadcasted the events of the earthquake and Tsunami that hit the coast of East Japan. The situation about the nuclear power plant however had been blurred by government officials as a “situation” that did not imply any risks to the population. The meltdown and explosions were hardly commented on. Generally, the focus of national television was on how to resolve the impacts of the natural not the radioactive disaster.

It was called the “great denial”.

The suspicion and mistrust towards the authorities began to expand as they continued to delay the release of information to the public. In a report of the Woods Hole Oceanographic Institution, I read that Japanese citizens turned to YouTube where footage of foreign news broadcasters were massively available. They got informed there, made their own picture and took the decision to evacuate.

Six months later, in autumn of 2011, the Japanese government under Abe passed a so-called “Homeland Security Act”. This was to prevent the terrible consequences from being reported within Japan. Journalists were and are sued for violations. Individuals who comment negatively on the topic on Social Media could be declared incapacitated without the right of the family or a lawyer to object.

Artist at service of the Japanese community

On the first anniversary of the Fukushima tragedy, the artists Sylvia Eckermann and Edgar Honetschläger in collaboration with Yukika Kudo launched an online streaming platform titled Sound of Sirens. It provided people in Japan and around the world the opportunity to present videos on the topic without having to fear restriction or prosecution. With the help of artistic methods, SOS sought to take stock of how a democratic society, how the individual, a group, a government, how the world public deals with a catastrophe of epic proportions.

In 2011, a considerable amount of Japanese escaped the radioactivity looking for a new home on remote islands, in the United States or Europe. Eleven year old boy Kazuto and his mother went to Austria and settled in Vienna. In 2012, Kazuto recorded an introductory video for the original SOS platform where he invited all those affected to express themselves through video footage about how Fukushima affected their lives.

For the 10th anniversary in 2021, Kazuto, now a grown man, opens the relaunched SOS website again. What has happened in the past 10 years? How was it for him to move to another country and how did the Fukushima experience  accompanied him on his path?

Sound of Sirens reflects the drama of the loss of liberal democracy and its consequences: Images of the tormented individual, destroyed landscapes and cities. Images of helplessness, pain and suffering, of fear and lies, of dystopian visions of the future, of precarious conditions on site and of protest and resistance.

You can visit the SOS website here. The collection of videos on it seems to be the only “proof” of the radioactive catastrophe due to the Japanese government’s ban. Hardly anything is to be found on Social Media today. It’s almost as if the radioactive disaster never happened. The Olympic Games, which are to take place in Tokyo this year, will they remember Fukushima? Or will they want to make all of it forgotten?

The video collection contains personal stories of all sorts, edited as well as live footage. It demonstrates how Japanese people turned from nuclear power approvers to activists. The video in the second row on the far left is especially impressive. It shows the natural and radioactive disaster in pictures.

I would also like to point out the video on the very bottom in the middle titled: human ERROR. It shows a Japanese punk who expresses his pain of being lied to by the government when it comes to the risks of nuclear energy. He points out to the advanced Japanese technology and asks:

Why not taking the reactors off the grid and switching to natural, regenerative energy? Why not hydroelectric power instead?

For Japanese standards, his performance is unbelievable. He unabashedly “talks” about the intricacies and injustices and makes us understand the reason for protest and change. It’s eye-opening and provides food for thought.

Before the nuclear crisis, Japan operated 54 reactors in 17 nuclear power plants all over the country along the coast. According to Statista, 10 years after the event 33 nuclear reactors are active again. Including the three destroyed Daiichi reactors, 21 were taken off the grid completely. That makes it the fifth biggest country in the world that has running nuclear power plants to day. (Guess who’s #1? see answer at the end of this article)

The country’s new Prime Minister Suga announced in his first speech in September 2020 to “make all possible effort to create a green society”. The goal: CO2 neutral until 2050. As nuclear power is perceived as an “environmentally friendly” energy source, Japan wants to stick to it to reach the goal. RIGHT!?! Ah, and let’s not talk about the stored contaminated water at the Daiichi reactor which Tepco wants to release into the ocean claiming it to be safe for the environment … (????)

Since 2018, the Japanese government allows its citizens to re-settle near the core of the Fukushima nuclear tragedy again.

They do so in good faith; they think they are safe. Denial or goodwill?

The #1 Nuclear Power Plant operator in the world is the United States of America with 95 active reactors. The runner up is France with 56 reactors. The bronze medal goes to China with 47 reactors followed by Russia with 38 nuclear reactors in use. Germany is #14 on the list with 6 reactors (numbers as per July 2020, Source Statista).