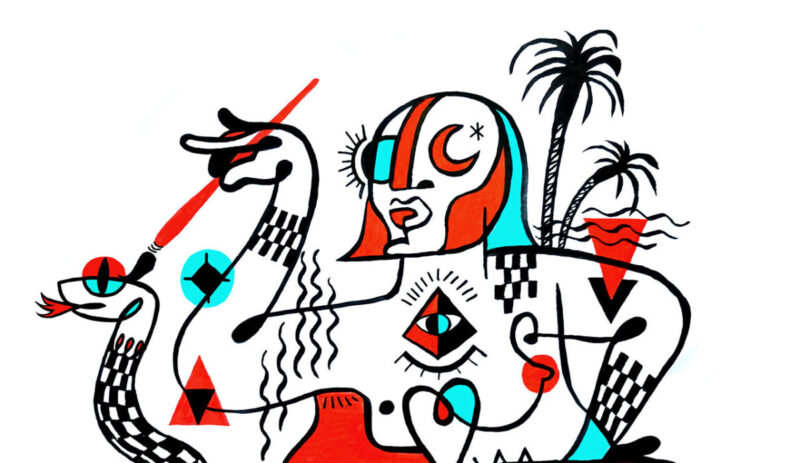 Three months ago, I spent a couple of days at the university and indulged in the simple pleasures of physically being inside a library and reading physical books, something you do miss when you study online and spend all your days over a computer.

In these days I read a publication about the Māori culture which examined the influence of our modern times. I came across a quote which stated that the life of a Māori usually rotates around the medium water, thus around the sea and especially around rivers. Water had been their major means of transportation. Today, in modern times, life rotates around land-based activities or we board an airplane in order to travel. The medium has changed. The time of travel is being shortened significantly – instead of weeks or months now we only need a few hours. Therefore, the text continues, do the young Māori generations of our times lose their connection to water. On the train returning to Berlin, I was looking out of the window watching nature pass by. Deceleration came into my mind. Through rapid developments thanks to technological innovation, we humans have managed to shorten or optimize all processes. We have optimized processes as much as we have largely optimized or trying to optimize ourselves. Answering emails on the go, calling here and there quickly, constantly within reach, constantly sharing our stories with others, showing how ‘optimized’ we have become, a true ‘super human’. Meanwhile the trend is going backwards, at least this is what I perceive because I myself have switched into reverse gear as I feel the urgent need to decelerate.

DECELERATION. Leave space in between tasks and plans to ‘de-optimize’. Breathe. Be present, be silent. In silence we allow ourselves both to be and to be ourselves. Just like my dear friend Asia said during her yoga class, with a whispering voice that touches you deep down within:

We are still human beings, not human doings.

The evening before my departure, I saw a video of Angaangaq Angakkorsuaq as part of the flow summit 2020. He is a shaman from Greenland whose grandmother had predicted him to teach us about the ice. Climate change concerns us all, he says. He who knows the ice, who can smell and feel it, says that the ice has drastically deteriorated from a proxy of 5 km to less than 2 km thickness. As spiritual beings it is our duty to maintain our habitat, the environment that provides us the capacity to live. Those who are mostly affected (perceived linear in time, thus those who are affected first) are the people that live in territories surrounded by water, thus along the coasts. The sea level is rising and threatens coastal areas and islands (he mentioned that Miami spends yearly over $400 billion to exhaust sea water off the streets, ‘because they can (still) afford it’). Rivers by contrast run dry. Boats cannot travel on dry riverbeds. ‘What to do with all these people?’ he asked. We have to do something now; as spiritual beings on this planet it is our duty to do something. Otherwise billions of people will lose their homes, their homelands and their identities. Become refugees of climate change. During my short stay at the university, I also learned that identity is a formation of ‘social meaning’ which is composed of the 4 pillars production, consumption, regulation and representation. Identity is not a rigid concept but rather a constantly changing formation, a work in progress and, to quote the author, a ‘negotiated space between ourselves and others‘.[1] Altogether this yields the matrix of (cultural) identity.

Climate hazardous activities do not stay within the area where they had been generated. To the contrary, the burden falls on the back of all countries and all global societies. During lunch at the university’s canteen, a fellow student from Russia said something equally interesting and terrifying. She told me that as it did not snow in Moscow during the previous Christmas season, tons of snow had been transported from Siberia to Moscow for the broadcasted Christmas celebration show to ‘look good’. Afterwards, it was discussed in Russia how ‘resource-friendly’ this had been. She continued that Russia does not care about things like that; Russia practically does not care about the climate change as it will ‘not be affected’ by it. Russia is a vast country with the majority of the territory to be inland. Russia does not care that the rising sea level is threatening New Zealand, for example. It is ‘not affected’ by it. And this, my friends, is the unflattering truth of the problem: separation! (I would never have imagined to use the term ‘my friends’ but it came up being in the flow so I might also leave it). We separate ourselves from the others and only look at our own benefit and well-being. What happens to others ‘is not relevant’ for us. Dangerous and sad! Common thinking?

Here comes another text into play which claims that climate is actually an ethical issue. Which norms and values do we base our actions on? If we perceive ourselves as separated entities our empathy only goes as far as to the boundary within this entity. And this boundary is getting smaller and tighter and does sometimes even not go as far as to our families, let alone neighbours. By the way, do you know your neighbours?

Human impoverishment! We are so wealthy but at the same time so poor. Our inner impoverishment is being reflected in our outer circumstances. The amount of people that are internally impoverished is being reflected in the amount of devastating external circumstances, situations and conflicts all over the world. All human made, all of anthropogenic origin. Laura Malina Seiler talks about it in her podcast elaborating on the question ‘how to deal with all of these conflicts that we experience in the world’, which I also listened to during my stay. Change can only happen from within. Here is where we have to clean up, in the interaction with our fellow human beings is where we shall ‘extinguish fires’ to heal our relationships, she said. Just as the boundary of our empathy tightened, it can also be enlarged again – to our neighbours and beyond.

Ethics begins inside ourselves with our values, and in essence deals with how we treat ourselves.

The outer world is always a reflection of our inner world. If the fire is burning inside ourselves it is burning in our outer surroundings through conflict, envy and pain as well.

Susan Baker claims the environment to be a common good, thus it should also be of common interest to preserve and protect its well-being. We cannot purchase it. It simply is and concerns us all. As a common good does the environment not only have a social but also a spiritual dimension. The preservation of life and human fulfillment largely depends on the maintenance of a healthy environment and ecosystem. The magic word is integrity.

It has to become clear to us that our social system cannot survive without a functioning ecosystem in place but that the ecosystem does not require a social system to survive.

According to Baker, the aim is to ‘find ways to build an economic system that allows humans to live within the carrying capacity of the planet’s ecosystem’.[2] This is not new. What is new though in her elaboration is the power of the individual will to act. It is both more effective and efficient than the political ‘machinery’ affected by lobbyism that prioritizes self-interest instead of the common good. A great example is the Fridays For Future movement – many individual’s will to act gaining collective power with the potential to have a collective impact.

The Māori base their value system on the belief that we are all connected. Humans, animals and plants stem from the same source. Water is all our life force. Therefore, our duty to protect it does not derive from a sense of obligation but rather from a certain innate instinct. We are at eye level with nature; it is our sister so we treat her with respect, appreciation and love. We care for her if she is not well. She has the right to be heard and protected.