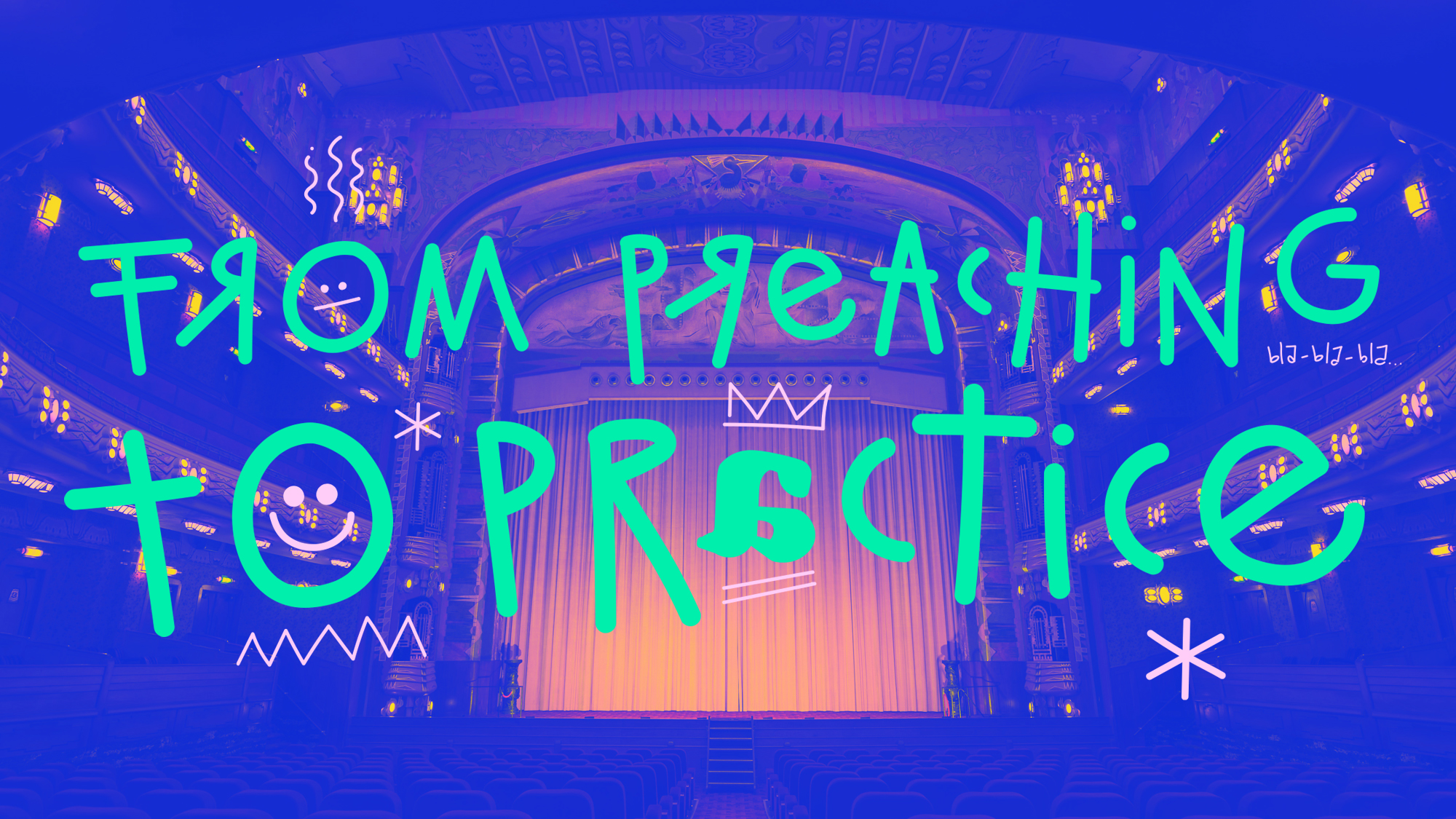 Past Friday on the 25th of March 2022, the Fridays For Future movement went out on the street again for global climate strike number 9. In Germany, it counted 220.000 activists demanding to put people before profit. In the face of the Russian war against Ukraine, especially we Europeans became aware of just how much we are dependent. On what? On the aggressor’s fossil fuels gas, coal and oil. Experts warn however, that the independent solution should not put global climate ambitions to a halt.

Last year around the same time in March, Fridays for Future activists in Germany participated at the 7th global climate strike. Last year around the same time, German theatre professionals expressed their solidarity with the FFF protests for more environmental protection. In a declaration, they articulated their determination to contribute to addressing the climate crisis. And they committed to 1,5 degrees. How has the theatre sector developed in one year?, I wondered. Here’s an overview.

Climate working groups in institutions are growing in number. And in addition to programmes such as performances and discussion formats, they also delve into the “real meat”. That is: One’s own artistic and organising processes. It is about analytics, the assessment of one’s carbon footprint and action plans to reduce emissions. And it is also about a structural change which, in a broader sense, involves demands on policymakers.

On the one hand, more and more theatres stage performances that deal with climate, ecosystems or biodiversity. Take for example the Theater Bonn. In an open source process they brought Maja Göpel‘s book Unsere Welt neu denken to the stage. Or let’s have a look at the Uckermärkische Bühnen Schwedt where they show Planet der Hasen for its young audience.

On the other hand, more and more performances are also produced sustainably. Planet der Hasen is one of those net-zero emissions productions. Sustainably produced is also the performance TRAUMSPIEL:E (UA) at Stadttheater Gießen while at Schaubühne Berlin, two cyclists are framing the stage of Kein Weltuntergang. They provide, as you might already guess, the light and sound for the piece. The rest of the material for props stems from recycled sources.

Exchange of ideas and expertise

Panel discussions as well as so-called “action days” that focus on ecological topics are likewise establishing themselves as a regular feature in the theatre landscape. Take, for example the series OIKOS Welt & Wirtschaft at Theater Bremen or the round table at Nikolaisaal Potsdam called Montags machen wir grün.

Last year, on the occasion of the COP 26 in Glasgow, the Schauspielhaus Bochum even launched their own climate summit called Ein Wochenende fürs Klima. To do this, they involved other cultural and local organisations. Such programmes often host workshops about sustainable production methods, upcycling or circular economy in the performing arts. Urban gardening, beehives on the roof as well as repair cafés are, in fact, being increasingly implemented, too.

The ultimate pinnacle: A whole festival about sustainability and climate protection in the arts. Quite rare? Not so! The next two months do already hold three major events in store. On the 21st of April, the Schauspiel Dortmund will be exploring questions about the future of theatre in its conference Theater der Zukunft – Zukunft des Theaters. Subjects will range from diversity and sustainability to an appropriate code of conduct or human resource development, for example.

On the weekend of 6th to 8th of May, the Pina Bausch Zentrum in Wuppertal will gather artists, scientists and activists groups to reflect on how theatres and the creative industry at large can contribute to the preservation of nature. Concerning the under construction festival, a mindful use of resources will impact how to be creative in the future. And they want to discuss how this can be done. A very diverse programme which you should not miss!

Last but not least: The climate conference endlich! at the Staatstheater Augsburg organized in cooperation with SAVE THE WORLD, Bund der freien Darstellenden Künste (BFDK) and the Performing for Future network. On the weekend of the 20th to the 22nd of May, it will bring together all possible professionals from state funded institutions, the independent scene as well as from cultural policy and science. It will truly be an extremely buzzing knowledge and networking hub for sustainability in the arts in Germany. And: Maja Göpel will open with a performance of her band!

It is important that sustainability is given a high political profile. With the new government as well as the Green Culture Desk in place, there are tax and funding instruments that advocate for a policy of sustainability.

During the last year, this has showed a strong development. As an example, one can take Dresden which is quite a strong nucleus sustainability in the arts in Germany. Here, the Staatsoperette Dresden teamed up with four other institutions from different disciplines to accomplish a one-year project called Culture for Future .

In a series of co-creation workshops, they developed a sustainability strategy as well as depicted significant measures that fit each institution. Furthermore, they captured data for a carbon footprint calculation and published a Charta for Sustainability in the Cultural Sector. In the upcoming weeks, they want to further strengthen the local network by involving the independent scene as well as the local authorities and politics. An inclusive and holistic transformation process, I reckon.

But other theatres are not lagging behind. More and more sustainability managers are being appointed such as at the Nationaltheater Mannheim, for example. Balancing and certification procedures do also become quite common. The Deutsches Theater Göttingen has engaged in assessing its so-called “economy of the common good”. Such a balancing based on what in Germany is known as a Gemeinwohl-Ökonomie evaluates the corporate success on the basis of common good oriented values (#PeopleNotProfit).

In the city of Bochum, the Schauspiehaus aims for an EMAS (Eco-Management and Audit Scheme) certification. If accomplished, it will be one of the very few cultural institutions in Germany next to PACT Zollverein and the Kulturveranstaltungen des Bundes in Berlin (KBB) which are EMAS certified.

It takes many small steps, patience and persistence.

In the meantime, major arts festivals started to calculate their carbon footprint, too. Take the festival Ruhrtriennale, for example. But also the Theatertreffen of Berliner Festspiele in Berlin began to examine the festival’s emissions. And they went one step further.

The festival team wanted to engage the 10 selected theatre productions that perform at the festival every year in an exchange on ecological topics. Hence, since 2021 the so-called green ambassadors take part in round tables and workshops at the so-called Forum Ökologische Nachhaltigkeit. The aim is for each ambassador to carry sustainable knowledge into their own institution for it to take hold and blossom. A snowball effect!

From preaching to practice

The development in the performing arts sector in Germany shows clearly that today, the question is no longer about whether the cultural sector should do something or not. It is rather about how (quickly) to engage in activities and with whom to cooperate in order to have a quicker and more effective impact. And: We move away from preaching and start the practicing part. And that we like a lot!

Before I end, here is a last recommendation: If you want to find out what sustainable culture has to do with dinosaurs please read the new article by Lynn Takeo Musiol and Christian Tschirner published on nachtkritik.

May the Brachiosaurus be with you!

You might wonder what happened to those that signed the declaration last year?! Well the activities of the network grew stronger, too until it finally joined the many for Future alliance groups as: Performing for Future – Netzwerk Nachhaltigkeit in den Darstellenden Künsten.

Many of those individuals and institutions mentioned in this article – including myself – are part of it. We are extremely active and have some really great initiatives going on…which I will gladly tell you more about in one of my next articles.:) Until then check out the many performances, workshops and conferences mentioned above and be: As sustainable as possible.