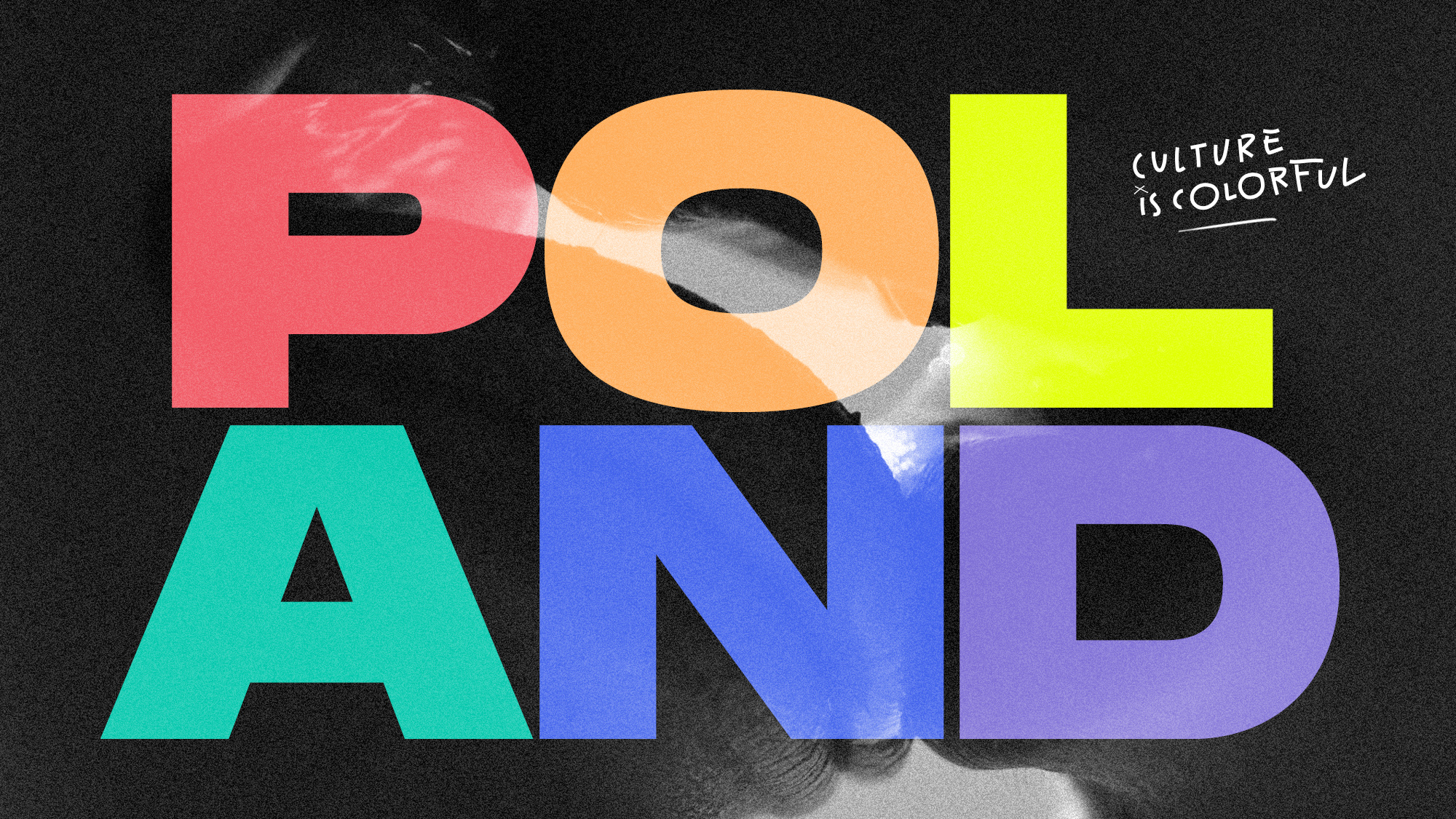 Humanity is experiencing critical times. Last week, Putin’s Russia has evaded Ukraine based on the misconception of “historical rights”, his imperialism and thirst of power. It is an attack against humanity, against Europe and the law of nations. And lastly it is an attack against democracy and the right to (artistic) freedom. It is an unfathomable abuse of power and a sign of aggression on a large scale.

Abuse of power however does also exist on a smaller scale, in one’s own country. Unfortunately, this is not uncommon. Unfortunately, Poland is an reoccurring example for it – an all levels and throughout the country. The abuse of the government’s authority to ensure “national interest”, for example. It means political control and repression at its best. And the disempowerment of those who oppose it.

The statement that the Polish cultural heritage is built on a Christian system of values couldn’t be more true. It expresses a conservative worldview with an accurate gender role model. It combines well with ideological faithfulness and loyalty to the government and to the catholic church.

Since 2016, Poland is ruled by the national-conservative party Law and Justice (PiS). Since then, the political divide within the country keeps on growing. The PiS party’s run after a strict “Polish” ideology has brought forward unprecedented cases of interventions in a political system that is supposedly democratic. Maybe you have heard of the Polish Constitutional Court crisis where five judges had been extraordinarily replaced. Or the anti-abortion ruling of the government (which they declared „pro-life“) that has prompted the largest protests since the fall of communism.

No halt to culture

In relation to culture schoolbooks have been rewritten, the structure of the public TV channels have been changed and artistic directors of cultural institutions were suspended. Examples are Warsaw’s Zacheta National Gallery of Art, Ujazdowski Castle Centre for Contemporary Art and the Polish WW II Museum . If this wasn’t enough, under-represented minority groups such as the LGBT community in Poland are publicly condemned as „inhumane“ by politicians.

The most recent case takes place in Kraków, the capital of the Małopolska Province. The Juliusz Słowacki Theatre has staged a controversial play which has been denounced as “anti-government” and a “discretion of art” by Polish politicians. As a result, its current artistic director and chief executive Krzysztof Głuchowski is set to be removed from his post by the officials.

The reason for it: “Unprofessionalism”, the „violation of the law on public procurement“ and Głuchowski’s violation “to care for the good name of the theatre“. In addition, the Ministry of Culture in Warsaw suddenly withdrew the already approved grant of PLN 3 million (almost 620.000 Euro). A necessary grant to a theatre which was in the process to be nominated a national institution and is now left without leeway.

We live in a democratic country. In culture, some things surpass social acceptance but the country is free.

Gliński’s understanding of freedom of the arts most probably implies the subordination of state-funded cultural institutions to the control of the government.

The play is a newly staged, modern version of the classic drama Dziady – in English known as Forefathers’ Eve – written by Poland’s most beloved poet Adam Mickiewicz in the 19th century. It features a number of political elements, referring to the Catholic church, protests against the near-total ban on abortion and the Polish government’s conflict with the European Union.

Promotional material for this play say that it shows how “today two Polands is our everyday life – two nations fighting against each other”. Here’s the trailer.

The defamation: “Abuse against the Polish State Rationale”

Politicians, especially from the Ministry of Education, rejected and condemned the play without ever having seen it. Firstly, Barbara Nowak, former PiS local councillor but now education superintendent advised schools to not see it. Side note: You need to know that Mickiewicz text is a mandatory reading in the Polish education system.

The education department then claimed it to contain “inappropriate contents harmful to children and school pupils that do not match the objectives of the education system”. Lastly, education minister Mr. Przemysław Czarnek congratulated Nowak for the intervention and labelled the play as „trash“ and a „deformation of beauty“. A preposterous move itself.

We’re witnessing culture dying. It’s all about the independence of art and freedom of artistic expression.

The Juliusz Słowacki Theatre is deeply concerned and dismisses all the accusations by the politicians. With respect to the play, it declared itself proud of “a wise, courageous production holding a perceptive dialogue both with Mickiewicz’s text and with the reality surrounding us”.

And the staff is protesting against the proceedings declaring ““The theatre is ours”. They clearly understand the dismissal of Głuchowski as a punishment for staging Dziady – a piece which confronts Polish politics “too much”.

The solidarity movement in Germany

After protest and solidarity pledges in Poland, the movement was passed over to Germany with the quest for support. Here, Matthias Pees – artistic director of Künstlerhaus Mousonturm in Frankfurt and designated artistic director of Berliner Festspiele – took over and initiated a solidarity declaration for the Juliusz Słowacki Theatre and its director (read below). Within only two days, the declaration was signed by over 80 German, Austrian and Swiss theatre directors and staff.

Amongst them are the Volksbühne, Berliner Ensemble and HAU together with Deutsches Theater and the KBB from Berlin. Or the Düsseldorfer Schauspielhaus, Theater Basel and the Burgtheater Wien, just to name a few.

This is meant to be a first act of solidarity. There is a strong desire to do more, to build up and empower the collaboration between Central and Eastern European institutions and artists. Many German theatres do already have programmes specifically designed for it, such as HELLERAU Dresden, Hebbel am Ufer (HAU) Berlin or Radar Ost Festival initiated by Deutsches Theater Berlin.

Although Pees is aware that the declaration might not impress and motivate the Polish government to refrain from its course, he says „it is important to generate awareness and visibility, to strengthen the Polish theatre networks and that the people there do not resign”.

He continues that many artists of younger generations from Russia, Ukraine and Belarus find exile in Poland and found networks and platforms of and for the persecuted and oppressed. Those networks will provide the opportunity for Western theatre professionals to connect with and become active beyond a declaration.

The Juliusz Słowacki Theatre in Kraków, since its earliest days one of Poland’s most important theatres, has found itself in an extremely difficult situation: a procedure for recalling its director Krzysztof Głuchowski was nitiated. Midway through the term of his office, with no substantial, artistic, or legal grounds for such a dismissal. The Juliusz Słowacki Theatre in Kraków is in the best artistic condition in years, its accolade and successes rising. In this year, it was to become co-organised by the Ministry of Culture and National Heritage in a step that would have made it a national institution. In November it premiered the quintessential drama of Polish romanticism, Adam Mickiewicz’s Dziady / The Forefathers’ Eve (1822–1832), directed by Maja Kleczewska. Its purely romantic text became a powerful voice in the discussion with our contemporary world and the condition of today’s divided Poland. The staging at the Słowacki was recognised the hottest production of the past year, many consider it a masterpiece, and the tickets sold out for months ahead. However, the production found no recognition among the politicians of Law and Justice (PiS), a party that is governing Poland. The head of Małopolska Regional Board of Education issued a statement strongly discouraging teachers and students from going to see the play.

The Minister of Education called it “junk” (dziadostwo), and the Minister of Culture also took a distanced stand. None of them has seen the play. Soon after its premiere the advanced negotiations about co-management of the theatre by the Ministry of Culture were discontinued, which resulted in not granting the Słowacki the PLN 3 million promised for this year. The tension around the Słowacki and The Forefathers’ Eve kept mounting. It deteriorated further when, in a gesture of human solidarity, the actors began to come out to the stage after the performances with photographs of children from refugee families dying on the Polish-Belarusian border, and when Maria Peszek, a wonderful artist openly supporting the LGBT+ movement and critical towards the policy of hatred engulfing Poland, strongly disliked by the authorities, was invited to the theatre for a single concert.

On 11 February the organiser of the theatre, the Board of Małopolska Region, initiated a procedure intended to remove Krzysztof Głuchowski from the post of the theatre director “for the reason of infringing regulations regarding the application of the Public Procurement Law Act” and due to “the director having rescinded the care for the good name of the Theatre while holding the post”. Now, as per Art. 15 section 6 of the Act on Organising and Running Cultural Activity, “The director of a cultural institution, appointed for a defined period, may be recalled before his term expires: 1) on his own request, 2) due to an illness chronically precluding the execution of his duties, 3) as a result of violating the law through the occupied post, 4) if the director deviates from the implementation of the programme of activity for the institution agreed on with the organiser”. None of the above conditions for recalling is met at the moment. Director Głuchowski can and wants to hold his post (with full support of all the theatre staff!), he has not infringed any regulations of law, and the Słowacki is in the best artistic condition in many years.

The theatre recognises the decision of the Board of the Region Małopolska Region to initiate the recall procedure as a politically motivated, groundless intervention into the autonomy of a cultural institution, and an attempt at limiting creative freedom. A punitive step for the creation and staging of The Forefathers’ Eve. After economic censorship that came first, now comes an attempt at censoring the artistic programme of a theatre, unheard-of in contemporary history, and a lawless attempt to recall by force a director supported by nearly the whole Polish theatre world and all the staff of the Słowacki. Unprecedented and dangerous, this situation calls for an immediate and solidary intervention of all artistic circles of Europe.

We, the undersigned colleagues, strongly support Krzysztof Głuchowski, the Juliusz Słowacki Theatre in Kraków, and the right to artistic freedom in Poland which has repeatedly been threatened or suspended in similar cases since 2016. We demand from the Board of the Małopolska Region to not remove Krzysztof Głuchowski from his office as Artistic Director, and from the Polish Ministry of Culture to not withdraw its financial contribution previously designated to the Juliusz Słowacki Theatre.

Signed on 23rd February 2022. Find the full list of all the signees here.

Barbara Nowak’s warning and discouragement in November 2021 created the opposite effect than intended. Within a short amount of time, remaining shows of Dziady were all sold out.