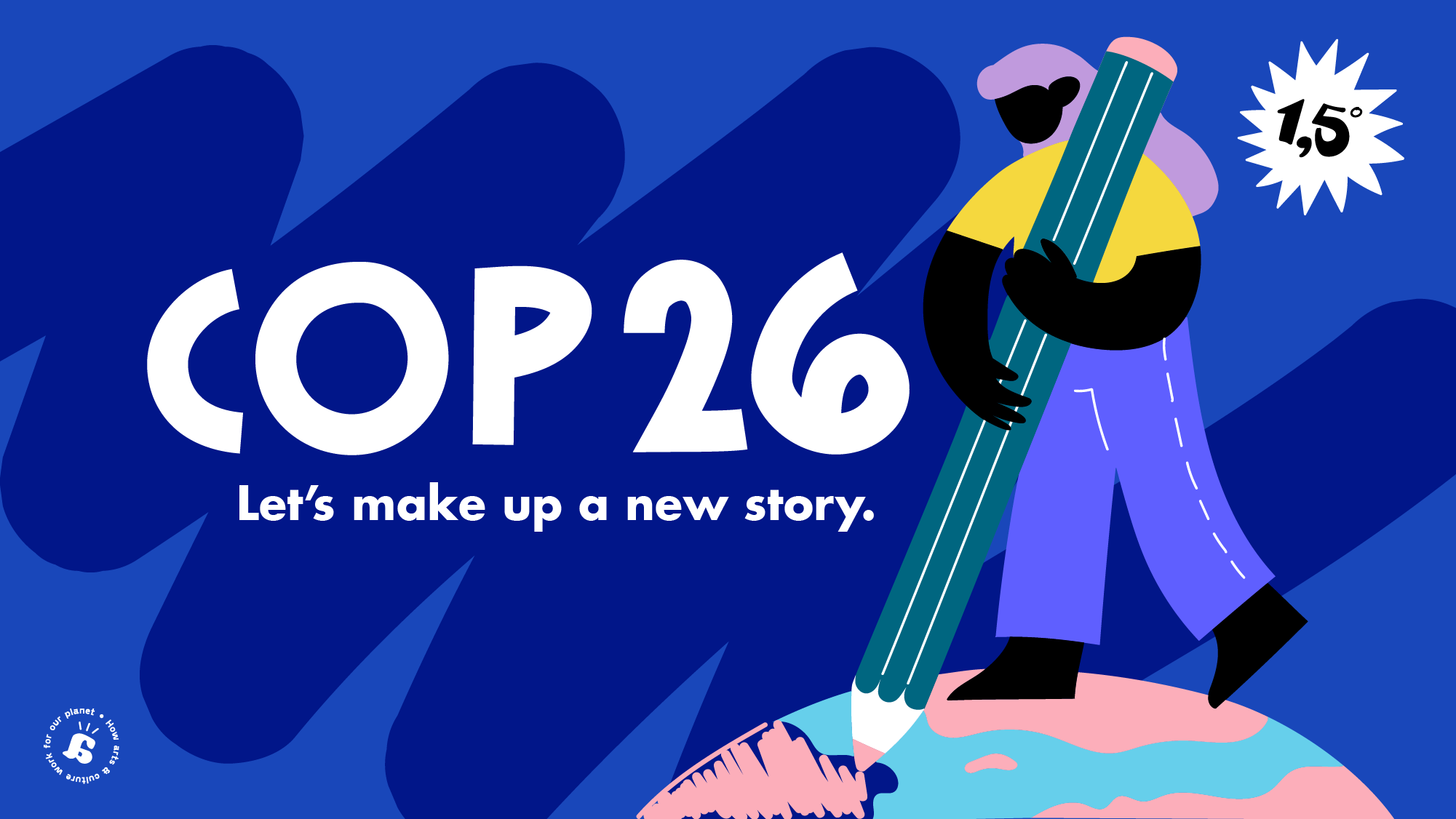 The climate crisis keeps the world in check. Scientists warn, Fridays For Future strike, the world leaders meet and debate – recently at the COP26 summit in Glasgow, Scotland. Can we keep the 1.5 C promise of Paris alive? And is it not time to integrate a very important ally, namely the creative community into the planning? Because they do reach hearts, involve the local communities and mobilise climate action. This article highlights some of the pledges made at COP26 and claims for culture to play a stronger part in future political processes.

Many numbers – One goal?

The COP26 conference in Glasgow has come to an end. In those 14 days the world was thoroughly watching the leaders of 200 nations discuss the further course of climate action. Eventually, the Glasgow summit was understood as the crucial point in human history for curbing climate change.

The outcome: The Glasgow Climate Pact. Some call it a progress and improvement, however others “disillusioning” or a “spectacular debacle“. Luisa Neubauer, Fridays For Future Germany activist labelled it “gibberish promises”.

Approaching the summit, the world set big hopes in COP26 – the Conference of the Parties No. 26 solely devoted to climate change (COP1 happened to be in Berlin in 1995). With the alarming IPCC report from August that affirmed “phase red for humanity” still in their minds, what can possibly go wrong? Nations cannot deny the urgency of the moment, right? After all, the climate crisis has become “one of the most pressing issues humanity currently faces” (UN Climate Change Executive Secretary Patricia Espinosa).

Nothing else can best summarise the summit’s outcome as the quote of Alok Sharma, president of the COP26 who said to be “grateful to keep 1.5 C alive” but also “deeply sorry for how this process has unfolded.”

Sharma’s major ambition was to condemn coal and scale up clean power. Coal, amongst its fossil fuel friends oil and gas, is the single biggest source of greenhouse gases. And 37% of the world’s electricity still depends on it. He wished for a coal “phase out” – the abandonment of brown coal combustion if you wish. However, the summit only managed a “phase down” – a last minute rephrasing with a great impact. It means a coal reduction instead of exit.

About pledges and commitments

Here is an excerpt of the pledges of the Glasgow Climate Pact:

1. to end and reverse deforestation by 2030. Even Brazil, home to the Amazon rainforest which has “allowed” with or without knowing a stark expansion of deforestation in the last years, has committed to it.

2. to limit methane emissions by 30% until 2030 compared with 2020 levels. As one of the most potent greenhouse gases and responsible for 1/3 of current warming, it is seen as “the lowest hanging fruit” (Ursula von der Leyen – EU Commission chief) in cutting down greenhouse gas emissions.

3. to move away from coal and fossil fuels. Next to India, neither the US, China nor Australia signed up. For the rest, major economies shall quit coal power in the 2030s while poorer nations need to do so in the 2040s.

4. to stop financing fossil fuel projects overseas until 2022. The 20 something countries (including Germany) commit to focus on “clean” energy such as renewables in their investments.

5. to reach net-zero. This means “producing less carbon than we take out of the atmosphere” (Alok Sharma). The goal is: -50% of global emissions by 2030.

6. to financially support developing countries to deal with the consequences of climate change. The deal is 100 billions of Dollars annually (starting from 2020) from the developed countries. Germany embroiders itself with an extra of 50 billion Euro per year.

I don’t know about you, but I cannot stand statements such as “we cannot allow the poorest countries that least contributed to the problem be the losers of climate change” (see Gerd Müller, German Minister of Development ) anymore. Ok, financial support is great – no offence – but it does not tackle the problem! Co2 reduction must come first! And especially from a country, which is the third largest per capita consumer of fossil fuels! So bring up the “real meat” and speed up the process!

The media talks about “historic reference to fossil fuels” and also scientists affirm a progress in the agreements made at the summit. However, it is not fast enough and does not meet the urgency of the crisis. NGOs and climate activists are disappointed and call it a tragedy. Jochen Flasbarth, Head of the German Delegation, says that after COP26 we have to “stay in the game and keep up the pace” in order to achieve climate targets. We are just at a starting point; no time to rest.

In fact, we have 97 months to half global emissions!

According to the Climate Action Tracker, COP26 “has a massive credibility, action and commitment gap”. The Tracker, backed by a number of organisations including the Potsdam Institute for Climate Impact Research, has calculated the warming based on the pledges made at the conference. The outcome: The world population is heading towards 2.4 C. Being nowhere near the 1.5 C goal, it does however show an advancement. At the COP21 in Paris the prediction pointed to 3.6 C.

Why is that? Most government’s plans to limit climate change are not substantial nor far-reaching enough. Only a few policy pledges are rated “acceptable”. While those of China and the US are “insufficient” and require “substantial improvement”, the commitments made by the EU are somehow “almost sufficient”.

Thriving for a better tomorrow

The whole development makes me think about what my mum used to say to me when I was a child: “Finish your plate, then the sun will shine tomorrow.” Who does not remember such an “If – then” parental promise? In short it indicates: Do something TODAY so that TOMORROW you will have created (see the direct correlation?!) a desired situation for us.

Doesn’t this hold truth for the limitation of global warming, too? Scientists are pretty clear about the future, so let’s do the job right TODAY. So I ask the leaders of our nations: Keep your promises and translate your commitments into real rapid actions… and I promise the sun will shine brighter TOMORROW.

What would far-reaching action plans of our global leaders be without the implementation of its people? What happens to top-down if it is not met by bottom-up? Exactly: Not much aka nothing! How can a stimulation and involvement of the citizens be accomplished?

Legal regulations and economic incentives and sanctions are, at best, tedious and discouraging. A forward looking transformational movement needs encouragement, it needs emotional involvement. How to achieve it?

Yes, the answer is: With the help of Culture!

Culture has a unique transformational role in sustainable development which has been acknowledged by the United Nations in 2019. Since 2007, UK NGO Julie’s Bicycle advocates for a sustainable cultural sector and since 2012 its efforts are backed up by the Arts Council England, UK’s major cultural funding body.

Together, they claim for cultural policy to be linked to environmental policy. Culture, they say, is the missing link to closing the gap between national climate commitments and their achievements. Culture has a unique capacity to raise awareness and create action. Therefore, it needs to be included into national environmental planning.

In a recent study of Julie’s Bicycle together with the British Council they found that the “creative community globally has embraced environmental action at all levels — local, sectoral, national — with creative content and sustainable practice”. Local groups, networks of pioneers, artists and institutions everywhere are engaged. But national cultural policy is not keeping up.

Thus, cultural players do not feel they have the mandate to address climate issues neither in public cultural policy nor strategically.

Give them the mandate, they say

According to Julie’s Bicycle, cultural institutions need “the policy frameworks and authority, funding and accountability” in order to fully unfold their transformative power. By boosting the creative climate movement, cultural policy can mobilise large-scale action. This will on the one hand accelerate the efforts of the sector itself (i.e. reducing its footprint) and, on the other, engage the community and society in the transformational process.

The ambition is there, the creativity, too but activities need to be backed up by cultural policy.

Of course, Julie’s Bicycle does not stop at demands. Based on the findings of the study, they have launched their own COP26 Call to Action: The Culture & Environment Policy Portal. It allows you to access the research and its findings. It also suggests a roadmap of how to integrate culture into national climate commitments.

A quote to end with…

I want to finish up this article with a quote of Sir David Attenborough who was summoned as the People’s Advocate to the conference which he opened with the following words:

In my lifetime, I have witnessed a terrible decline. In yours, you could and should witness a wonderful recovery. That desperate hope, ladies and gentlemen, delegates, excellency is why the world is looking to you and why you are here.

You can watch his full speech here. I love how he is straight to the point concerning the problems and their origin but at the same time provides solutions and provokes hope. “If working apart we are force powerful enough to destabilize, surely working together we are powerful enough to save it” – a quote I have used in my latest artistic project called EMIT.