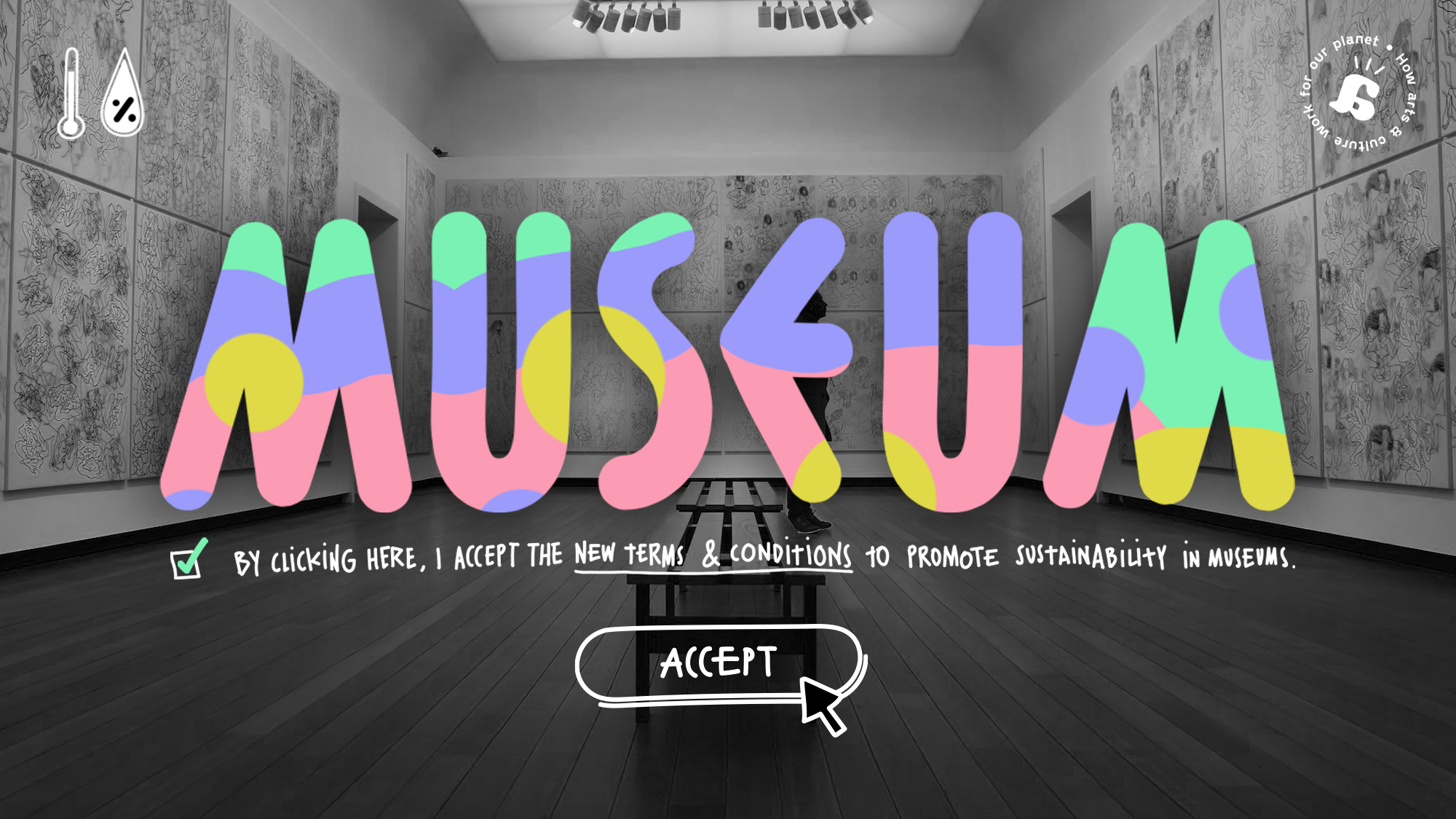 Europe is clearly noticing the impacts of the climate crisis. This summer, various devastating fires broke out all over the continent. The Berlin newspaper Tagesspiegel recently wrote that this year’s summer had been amongst the four hottest summers in Germany since 1881. Only 2003 was hotter than 2022.

During hot summers museums can serve its citizens and visitors to escape the heat. Some even promote it on their websites. Is the climate crisis playing into the hands of culture after all? And hence, are the times of audience development passé?

In the additional crisis, Russia’s war against Ukraine and its consequences, Europe is experiencing rocketing energy prices and the threat of empty gas tanks during winter. Headlines such as #CodeRed and #EmergencyPlanForGas brings up the concern about sufficient supply which stands like an elephant in the room. Who will have it warm and be able to pay for it this winter?

Will cultural institutions now serve as a place for us to escape the cold?

What does the museum’s climate have to do with it?

It has long been a sensitive topic because of the horrendous amount of energy required for technical devices to regulate the climate inside of museums. Objects of art on display – or on storage – require a very specific climatic condition in order to be maintained. A gold standard has impacted the decision making of museums all over the world.

This gold standard refers to the temperature and relative humidity (RH) in museums. 20°C and a range of 50 – 55% RH were determined  to be the perfect condition to preserve art collections. This dates back to the work The Museum Environment by Garry Thomson from 1978. It has become the internationally recognized standard. It impacts which fine art objects can be lend to whom. In a modern museum context, the exchange of artworks as loans is part of the daily routine.

It’s not all gold that shines

Seems logical one may think? Well, not entirely! The problem about this 20/50 ratio is that it holds true for every type of artwork, no matter if it’s parchment paper or an object made of stone. But different categories of objects have different climate requirements and consequently different conservational needs. It can be said that the 20/50 ratio is based on conserving the most fragile category of objects in the whole exhibition room.

The result of such a one-size-fits-all solution it is that the whole room is maintained at a climate which the majority of objects does not really need. Many of the artworks at display could easily deal with a higher temperature or lower relative humidity – or vice versa.

Deviating from this rule would on the one hand put the daily business at risk. However, on the other hand it is easy and simple to remember. Consequently, it saves personal resources and time, for example for not having to evaluate the real conservational needs.

Maintaining the 20/50 ratio is done by the museum’s air-conditioning system (HVAC) which runs day in and day out. Speaking in terms of energy consumption, that is an extreme amount of energy, CO2 and of horrendous costs.

Jim Reilly at the Image Permanence Institute (2012) – IIC and ICOM

The cost of the one-size-fits-all

According to heritage scientist and researcher Stefan Simon, it is quite usual that museums consume about 300 kWh per m2 annually. For an institution such as the Museum Ludwig in Cologne with an exhibition space of approximately 8.000 m2 that is 2.4 million kWh – every year. Some of the new museums currently under construction will consume even more rather than less.

That makes the museum “the biggest consumer of energy in the urban context.”

In comparison, a standard 2-person apartment of 80 m2* consumes approx. 27 kWh per m2 per year. Hence, one average museum equals and supplies a minimum of eleven households. Quite significant, isn’t it?

*including a washing machine, dishwasher, fridge, freezer and one TV; excluding the heating of water with electricity. Source

Stefan Simon continues that museums could achieve energy savings for up to 50% by stretching the 20/50 ratio and implementing a larger so-called climate corridor. If you wonder what that exactly means, you are about to find out.

International museum experts have been questioning this one-size-fits-all rule for over a decade now. In 2012, the Bizot group launched the Bizot Green Protocol which introduced an extension of the 20/50 ratio including new rules for conservation. In the years to follow, other museum expert associations such as the IIC and ICOM-CC based their debates and findings on those rules.

The protocol affirms that the care of the collection and conservation of objects regarding loan, storage and display is still the number one goal of a museum – and its duty, mind you. However, they claim that distinctions concerning the different category of object need to be made.

And in each situation the conservator’s evaluation is essential. This evaluation concerns the museum’s climate condition – from both the origin aka the lender and the destination aka the borrower.

However, the care of collections should be achieved in a way that does not assume air-conditioning systems. Museums are to consider passive methods, simple technologies that are easy to maintain or air circulation systems in order to reduce energy consumption.

As a result, the Bizot Group recommended the interim guidelines for museums and galleries. These are:

The real problem for the conservation of artworks

What is the real deal and therefore the true problem are the relatively quick changes of temperature and RH and the frequency of fluctuations. Take the loan business for example. Art objects on loans are exposed to varying environments as they are being moved to different parts and climatic zones of the world. This provides chance for damage.

Another real problem are the reciprocal effects of temperature and humidity in combination with relatively frequent fluctuations. Dry air withdraws moisture from artworks so they lose weight and shrink. Humid air works vice versa. Thus, climate fluctuations keep the objects in motion. This can be encouraged by a fluctuating outdoor-indoor ratio, too.

However, when asking Stefan Simon why and where we are really losing our cultural asset, he says:

These are events like in early September 2018, when 20 million objects burned in Rio de Janeiro’s National Museum. That’s earthquakes, floods, natural disasters. It is war. It is also, above all, urbanisation and agriculture causing cultural heritage to disappear. It is not the wrong climate in a museum.

What is better than gold

Museums such as the Tate Modern or the Smithsonian have been experimenting with different measures for many years already. Others have been following along and since the crisis of the pandemic and the war, the number is growing rapidly.

One effective measure is to implement nightly shutdowns, for example of the ventilation, air-conditioning or air intake systems. These devices help to keep the desired climate condition stable.

Decentralizing the air-conditioning is another extremely effective tool. However, it is often not possible due to the age or functioning of the HVAC system. In that case, museums might consider to place artworks with the same conservational needs together – both on display and on storage. If this again is not possible, they may use special display cases for the most sensitive object during display.

Last but not least, museums may as well adapt their standards for outgoing loans. Knowing – or better: having experienced – that your art objects keep on being conserved well at an extended climate corridor you might as well allow and invite your borrowers to do the same.

Various museums or initiatives share their experience and publish their measures to reduce energy consumption or implement a better sustainability pathway in general. Some have also released their own toolkits or list of practical tips and recommendations.

One helpful toolkit stems from the CIMAM group of the year 2020. With it they want to inspire museums to implement necessary changes with the long-term goal to become carbon neutral. It consists of examples of immediate action steps and lists existing sustainability action plans by museums such as the Tate Modern. It does as well propose a few carbon footprint calculators and much more.

Remedy in sight for Germany?

Stefan Simon has been advocating for implementing new guidelines in Germany for quite some time. While being an expert on the field, in 2019 he proposed to assemble a central task force for museums and galleries to be able to develop tailor-made solutions – a Green New Deal for the Arts.

Stefan Simon tends to say that 20°C/50% is oriented towards „what is technically possible and not what is necessary for conservation purposes.“ Therefore he, together with many international colleagues – such as Łukasz Bratasz, Johanna Leissner and Ralf Kilian – are asking to take a more evidence-based approach.

“Seasonal gliding” is the new keyword and relates to adapting the museum’s climate to the outdoor climate. For example: If it is 40°C outside, the exhibition room can be cooled down to 26°C instead of 20°C.

In 2021, Stefan Charles, Deputy Mayor of Fine Arts and Culture of the City of Cologne, released an advocacy paper for green museums. The paper – Grüne Museen, jetzt! – further developed the demands to both politicians and institutions.

The challenges we face, both now and over the next few years, are going to be among the most difficult – and interesting – in our history. We will only make a difference if we choose to work together as a sector.

In spite of all of these advances, the proposals and research findings have for long not been incorporated in Germany’s museums. However, this has changed with the outbreak of the Russian war against Ukraine and the energy crisis it has put the country in.

A true revelation and a huge step towards a reduction of energy costs and CO2.

German recommendations in a nutshell

Basically, the recommendations for Germany are very much alike the ones you read above. However a few differences apply, which are:

It is a tough cookie to realise that, after all, the energy crisis is actually playing into the hands of sustainable measures taken by cultural institutions. The local crisis gets them to implement what has been known for a while. It clearly is an example for transformation by disaster. A different disaster that we expected but clearly one that leaves us no other choice than to react.

In Germany, cultural institutions are asked to reduce their energy consumption by 20% – asap. And further reduction aims shall be presented concerning how probable it is to achieve them. Museums are asked to extended their climate corridor. This is “due to the threat of energy shortages” says Deutscher Museumsbund. Only until this crisis is over? No, I do believe that these new rules are here to stay.

Please note: The term museum in this article includes all types of exhibition halls, showrooms and galleries, too.